Growing up I was always fascinated with anything that had a motor in it. I was constantly around vehicles and aircraft as both my father and my grandfather were and have been involved in both of these industries. I remember playing with various toys such as Hot Wheels and remote controlled airplanes as a child and partaking in airshow flights with family friends. As such when I was trying to decide on a heritage site in Hamilton to discuss, the Canadian Warplane Heritage Museum was at the top of the list. 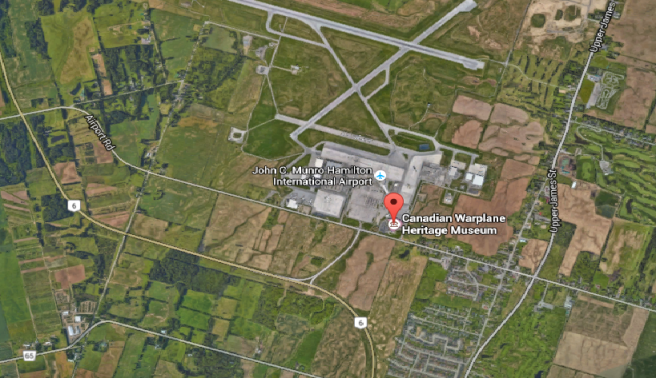 The Canadian Warplane Heritage Museum located in Hamilton (Mount Hope), Ontario is a museum that is dedicated to preserving the heritage and history of war aircraft and war in Canada and abroad. The Warplane Heritage Museum is mainly funded though community donations and by other donors who have helped work on the aircraft and who have donated various planes. Locating and getting to the museum is fairly easy as it is located right beside the John C. Munro airport on the Hamilton Mountain. Throughout its history the museum has gone through numerous changes and expansions that have molded it into the unique centre that it is today. As you arrive to the museum you are welcomed by a Lockheed CF-104D Starfighter that is on display outside of the museum. The plane is an iconic piece of Canadian war heritage that was one of the most innovative planes ever built. As you walk in the museum, it itself, is very accommodating in nature. Furthermore the museum offers free parking and has an overflow lot during large events or busy times. The museum is also laid out in a fairly accessible which allows guests with special needs to enjoy the museum in an interactive manner. Wheelchairs are also available free of charge at the guest services desk within the museum. When you first attempt to take in all the museum has to offer it can seem a little overwhelming at first. Thankfully the museum has guided tours that allow you to fully engage with and enjoy all of the different features and displays that are available to the public. The tour guides are very knowledgeable about the planes and the history behind them. I myself have been to the Canadian Warplane heritage museum numerous times and each time that I have been I learn something new that I did not know before. The gentlemen that gave the tour that our group was a part of was an actual mechanic and was able to explain the numerous aspects of each plane and was able to provide an in-depth history of the aircraft.

One of the interesting features of the museum is that there is a lot of preservation that takes place as many of the planes are used in historical displays and various other airshows. This is an interesting topic especially as it relates to several themes in this course that deal with preservation, heritage and portraying the past. On the one hand you have the issue of losing the authenticity associated with the original aircraft and how it is portrayed on the museum. On the other hand though you have the fact that the aircraft are also used to help support the museum and the aircraft need to be in working condition in order to run aircraft tours and flying events. These events and flying tours provide valuable funds to the museum that are required in order to help support and maintain the vast array of aircraft that are on display. The general public is allowed to register for various flying tours in some of the different aircraft from something small such as a Boeing Stearman to something large as the Avro Lancaster Bomber. These tours provide a unique experience that allow guests to physically engage with and experience a part of the past in a manner which is not normally available. I remember my first time going up in a historic aircraft. I was about eight at the time and I was very enthusiastic to be able to experience and fly in something that was used during the war. The experience that the flight gives you is breathtaking. It allows you to reflect on the world around you while flying around and thinking about all of the various things that the plane and the people flying it may have had experienced.

As such I would recommend the Canadian Warplane heritage museum to all of those who are interested in Canadian history and want an opportunity to experience a part of the past at the same time. You won’t be disappointed, that’s for sure! For more information please visit http://www.warplane.com/